Local Water Districts may be on the hook for billions

The water districts of Fallbrook and Rainbow are currently seeking to switch wholesale water suppliers from the SDCWA to the Eastern Municipal Water District (EMWD), which is expected to save their ratepayers millions of dollars each year. The terms and conditions of this switch, also known as detachment, fall under the purview of San Diego’s Local Agency Formation Commission (LAFCO). If LAFCO approves their requests, the issue would ultimately be brought before the residents of the two departing districts for a vote.

On September 2, the SDCWA submitted a letter to a consultant hired by LAFCO seeking potential “exit fees” to be placed on the two water districts. Within the letter, the SDCWA claims that the two agencies represent 6% of their total revenue and should therefore pay the equivalent share of what the SDCWA estimates to be its total liability. The SDCWA estimates its total liability at $20.5 billion and thus requiring a $1.2 billion payment (6%) by the two small districts to detach. Below is the table from that letter.

WHAT DOES THIS MEAN FOR OTHER WATER DISTRICTS?

In a letter dated September 24, the Rainbow and Fallbrook water districts responded to SDCWA’s claims calling them “illogical” and “not moored in law or even common sense.” The letter also provides a table breaking down each of the 24 member agencies’ massive “obligations” based on the SDCWA’s math. The full breakdown taken from the letter is below. 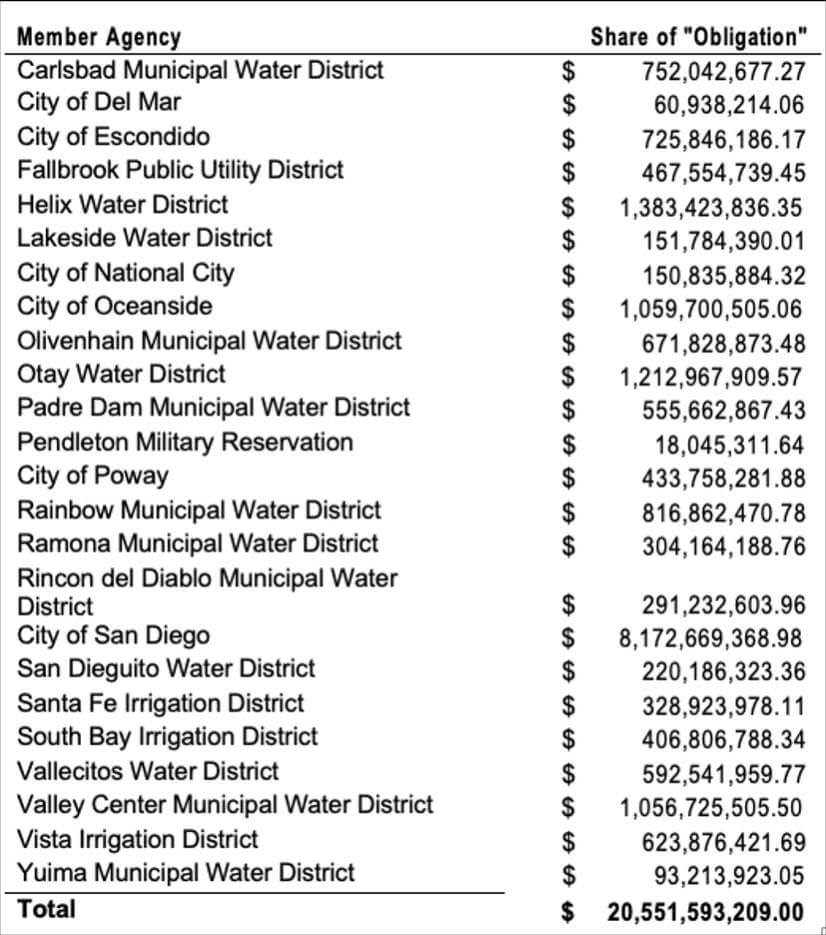 Copyright (C) 2021 Ratepayers for Water Choice. All rights reserved.
You are receiving this email because you are known to be engaged in civic affairs.